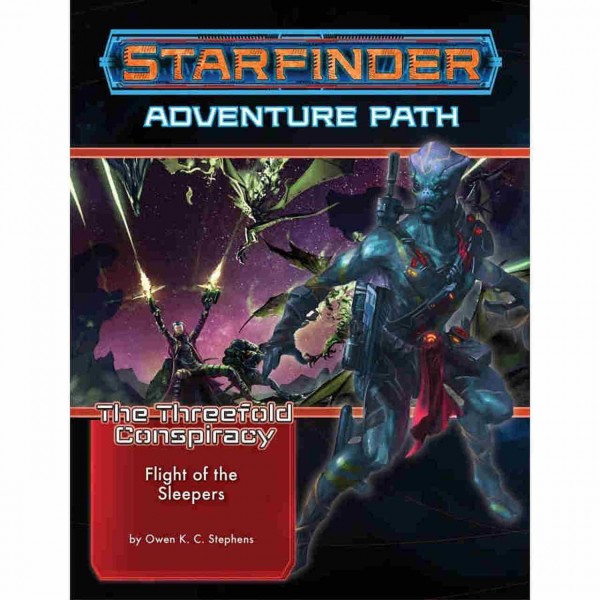 Barely escaping a doomed transport, the heroes find themselves trapped within a bizarre research facility that has come under attack. Like the other specimens within this crumbling lab, the heroes must seek escape as their first order of business. As they struggle against weird technology and runaway experiments, the heroes run across the elite Stewards agents performing the raid, who prove to be allies and potential rescuers. The Stewards have a mission, however, and they recruit the heroes to help finish it. In so doing, the heroes uncover a little truth and a lot more questions in need of answers!

Flight of the Sleepers is a Starfinder Roleplaying Game adventure for four 3rd-level characters. This adventure continues the Threefold Conspiracy Adventure Path, a six-part, monthly campaign in which the heroes unravel the machinations of insidious aliens who have infiltrated galactic society. This book also includes an article describing the enigmatic grays, a survey of fringe science, and a selection of new and strange monsters.

Each monthly full-color softcover Starfinder Adventure Path volume contains a new installment of a series of interconnected science-fantasy quests that together create a fully developed plot of sweeping scale and epic challenges. Each 64-page volume of the Starfinder Adventure Path also contains in-depth articles that detail and expand the Starfinder campaign setting and provide new rules, a host of exciting new monsters and alien races, a new planet to explore and starship to pilot, and more!

- Conspiracy theories meet Starfinder in this sprawling political epic packed with deception, betrayal, and secrets!
- The Threefold Conspiracy Adventure Path is one of the most important publishing programs of Paizo’s 2019 calendar, with monthly adventure installments, a Starfinder Pawns collection of character counters, and tie-ins with Paizo’s worldwide Starfinder Society organized play efforts.